What Tropic Hormone Stimulates Cortisol From The Adrenal Gland?

What Tropic Hormone Stimulates Cortisol From The Adrenal Gland? 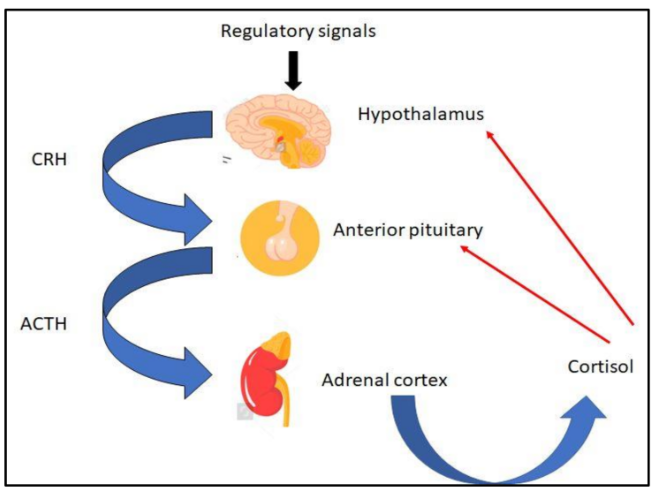 You have probably heard that cortisol is a stress-response hormone in your body. This is something you want to keep at bay for optimal health, so it is important to find out what the function of this hormone actually is, which tropic hormone stimulates cortisol from the adrenal gland, and how it is released when you are under stress.

In this blog, we will answer all these questions that you have about cortisol and its stimulation from the adrenal gland. We hope that you will find this blog useful. Let us get started.

Hormones are chemical messengers that are produced in the body. They are released into the bloodstream and send messages to target cells and organs, which in turn produce their own hormones. The brain is not directly affected by hormones, but it does have receptors for some of them (such as adrenaline).

Hormones are one of the major ways that your body communicates with itself. They help regulate many of your body’s functions, such as growth, development, and reproduction. 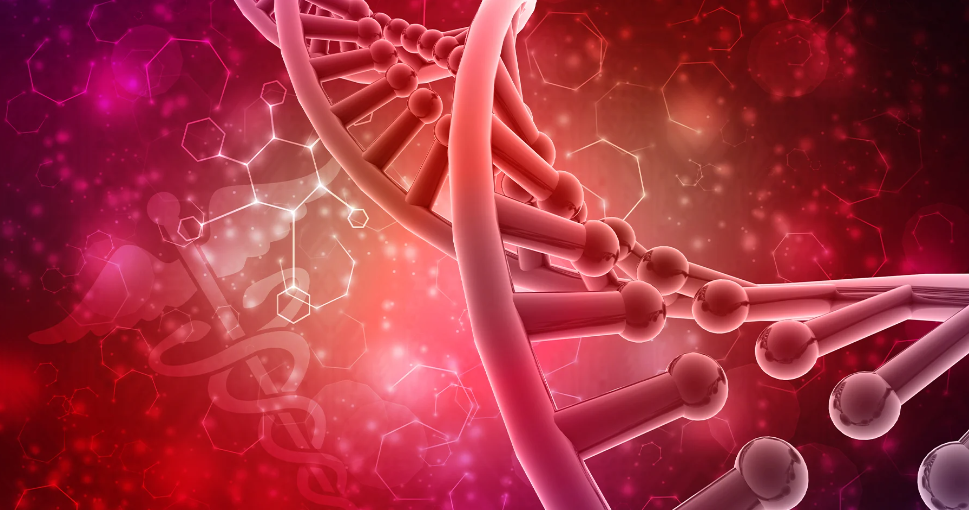 Some hormones can be made in one part of your body but affect another part of your body — for example, insulin is made by the pancreas but affects all cells in the body that use sugar for energy. Other hormones affect only one specific part of the body — for example, reproductive hormones such as testosterone or estrogen cause changes in sexual characteristics only in males and females, respectively!

Some of the most common types of hormones include:

This is a hormone that helps your body use sugar (glucose) from food. It also helps keep your blood sugar levels balanced, so you don’t get too high or too low after eating.

Growth hormone-releasing hormone is a peptide hormone produced by neurons in the hypothalamus gland located within the brain. It stimulates the release of growth hormones from the pituitary gland. 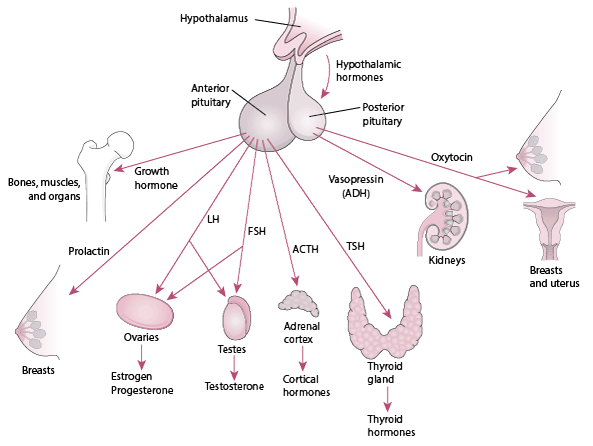 The gonadotropin-releasing hormone stimulates the release of both follicle-stimulating hormone and luteinizing hormone from the anterior pituitary gland. GnRH is secreted at night when testosterone levels are low and inhibits the secretion of LH during daylight hours.

Cortisol is a steroid hormone that is released by the adrenal cortex in response to stress and low blood glucose levels. Cortisol helps maintain blood pressure and blood sugar levels during periods of stress and also plays an important role in protein synthesis and fat metabolism.

Estrogen is a hormone that plays an important role in the development of female reproductive tissues. The main source of estrogen in women is the ovaries, although there are also estrogen receptors on other tissues such as adipose tissue, bone, and skin. Estrogen is also found in men but at lower levels than in women. Estrogens are the primary female sex hormones, with estradiol being the primary form of estrogen made in the body.

Progesterone is the major female sex hormone and is produced by the ovaries during the second half of your menstrual cycle (luteal phase). It prepares your uterus for pregnancy. Progesterone levels rise after ovulation (when an egg is released from an ovary). If you do not get pregnant, progesterone levels fall, and menstruation begins again. Progesterone can be measured through saliva or blood tests.

What Are Tropic Hormones?

Tropic hormones are naturally occurring hormones that regulate your energy, mood, and metabolism. They are produced in the pituitary gland and play a key role in maintaining homeostasis. 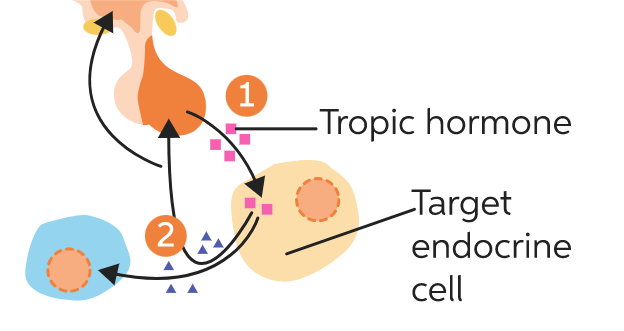 The hypothalamus is part of a system known as the endocrine system, which also includes glands such as the pituitary gland and thyroid gland. In addition to controlling your body’s metabolism, these glands secrete hormones into your bloodstream that act on distant organs, such as muscles and bones, or even on distant parts of your body like your skin or heart. This can make you look younger or feel stronger than you would otherwise.

What Is Adrenal Gland?

The adrenal gland, also called the suprarenal glands, is a pair of small organs that sit on top of the kidneys. They are part of the endocrine system, which means they secrete hormones into the bloodstream to regulate body processes. 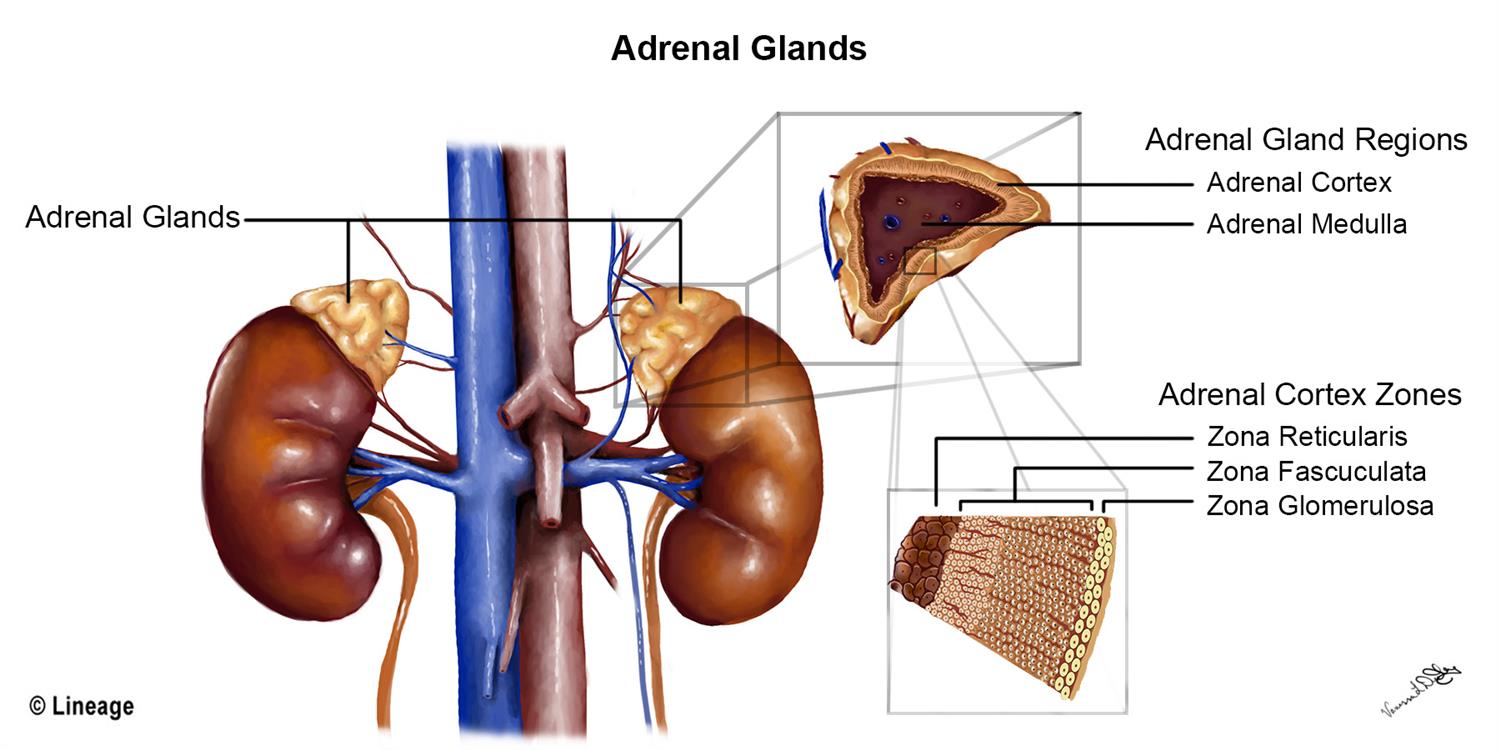 The adrenal glands are made up of three parts: the medulla (the innermost part), cortex (the middle), and zona reticularis (the outermost). The medulla produces epinephrine (adrenaline) and norepinephrine (noradrenaline), while the cortex makes dehydroepiandrosterone (DHEA), dehydroepiandrosterone sulfate (DHEA-S), DHEA-C, and cortisol. The zona reticularis produces glucocorticoids like cortisol, corticotropin-releasing hormone (CRH), and corticotropin-releasing hormone releasing factor (CRHRF).

What Functions Are Performed By Adrenal Gland?

Adrenaline is a hormone that helps us cope with stressful situations by increasing heart rate, blood pressure, and breathing rate. The adrenal glands play a vital role in our bodies, especially during times of stress or high energy expenditure. When we are under pressure and need to perform at our best, the adrenal glands release adrenaline into our bloodstream. This helps us to fight or run away from danger. 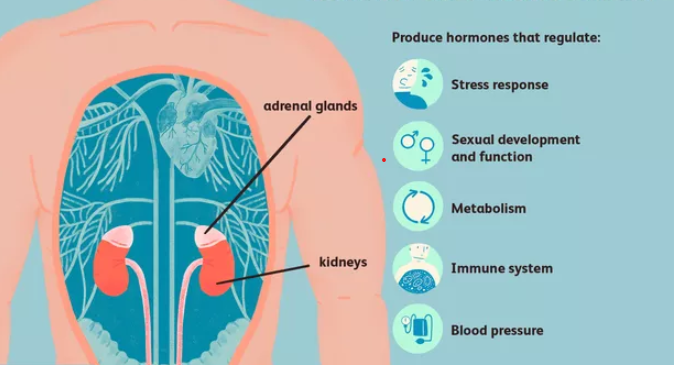 The adrenal glands also secrete a number of other hormones that help maintain your blood sugar level and body temperature. These hormones also affect the way you feel emotionally and physically during times of stress or exertion.

The adrenal glands make two types of hormones: androgens and corticoids. Androgens are testosterone and other male sex hormones like dihydrotestosterone (DHT), while corticoids are cortisol and aldosterone. Each hormone is produced in a specific area of the gland.

Cortisol is a hormone that is produced by the adrenal gland. It is involved in the regulation of blood sugar levels and energy production. It also helps regulate stress responses and blood pressure.

Cortisol is an essential hormone for life: it plays a vital role in regulating metabolism, digestion, and immune function. In addition to these processes, cortisol also helps the body adapt to stress and exerts an anti-inflammatory effect on tissues. 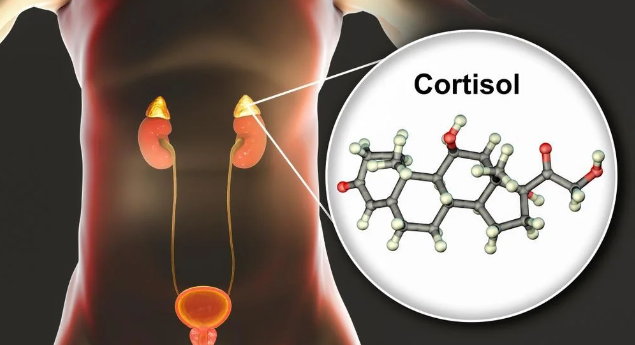 Cortisol production is dependent on sunlight exposure and has been noted to decrease with increased skin pigmentation (melanin). This suggests that darker-skinned individuals may be less able to regulate their blood glucose levels when exposed to sunlight, leading them to experience higher levels of insulin resistance.

What Part Does Cortisol Play In Your Body?

Cortisol is released into the bloodstream when your body needs to respond to a stressful situation. For example, if you’re stressed out from schoolwork or have a test coming up, your adrenal glands will release cortisol into your bloodstream. This hormone signals other hormone systems in your body to increase the production of glucose (sugar) and oxygen so you can use those resources more effectively during times when you need them most (like during exercise). 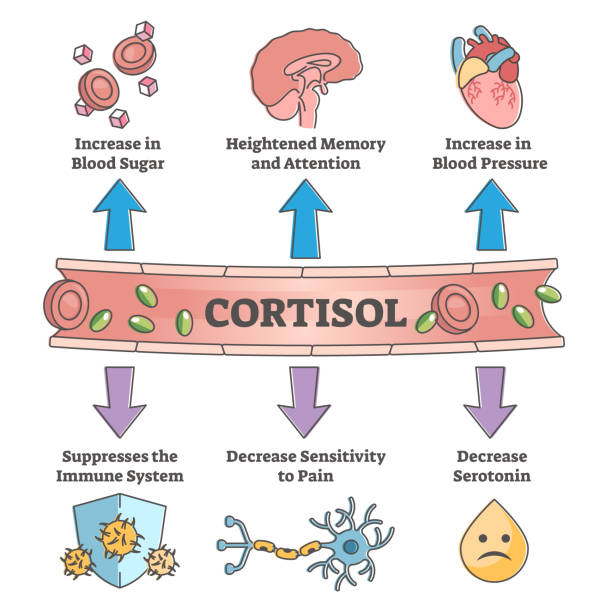 When you’re under stress, cortisol helps to increase blood pressure and heart rate and makes sure that you have enough energy to deal with your situation effectively. It also helps your body respond quickly to danger so you can get away from it as quickly as possible without getting injured or killed.

Cortisol also helps control blood pressure by helping the kidneys respond quickly to changes in salt levels in the bloodstream by increasing sodium retention or decreasing potassium retention as needed (in order for this effect to occur effectively).

Which Tropic Hormone Stimulates Cortisol From The Adrenal Gland?

The answer is ACTH or adrenocorticotropic hormone. ACTH is a tropic hormone that is released by the pituitary gland. It stimulates the adrenal cortex to release cortisol and other glucocorticoids.

ACTH is released by the pituitary gland in response to low blood sugar or stress. It also controls the release of thyroid-stimulating hormone (TSH), which stimulates thyroid hormone production. 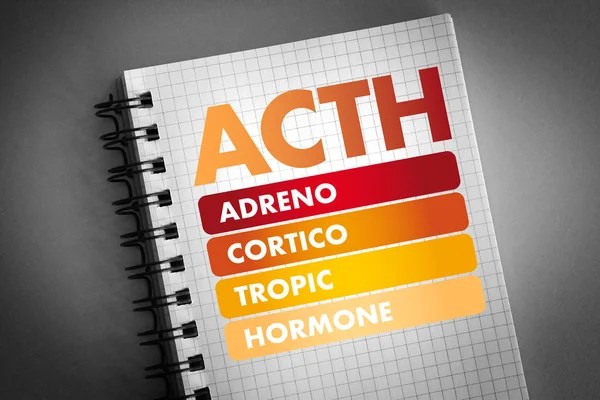 The release of cortisol is controlled by the hypothalamic-pituitary-adrenal (HPA) axis. When there is a stressful event, the hypothalamus releases corticotropin-releasing hormone (CRH). CRH travels to the pituitary gland and stimulates its release of ACTH. ACTH stimulates the adrenal cortex to release cortisol.

How Cortisol Is Released When You Are Under Stress?

The body has a natural response to stress. The hormone cortisol is released from the adrenal glands, located just above each kidney. Cortisol helps mobilize energy to deal with a stressful event and also suppresses functions not needed for survival during times of stress.

Cortisol is secreted in response to a perceived threat or challenge and then gradually removed after the threat or challenge has passed. In this way, your body adapts to all types of stressors on a moment-to-moment basis. However, if cortisol remains high over time, it can cause problems. 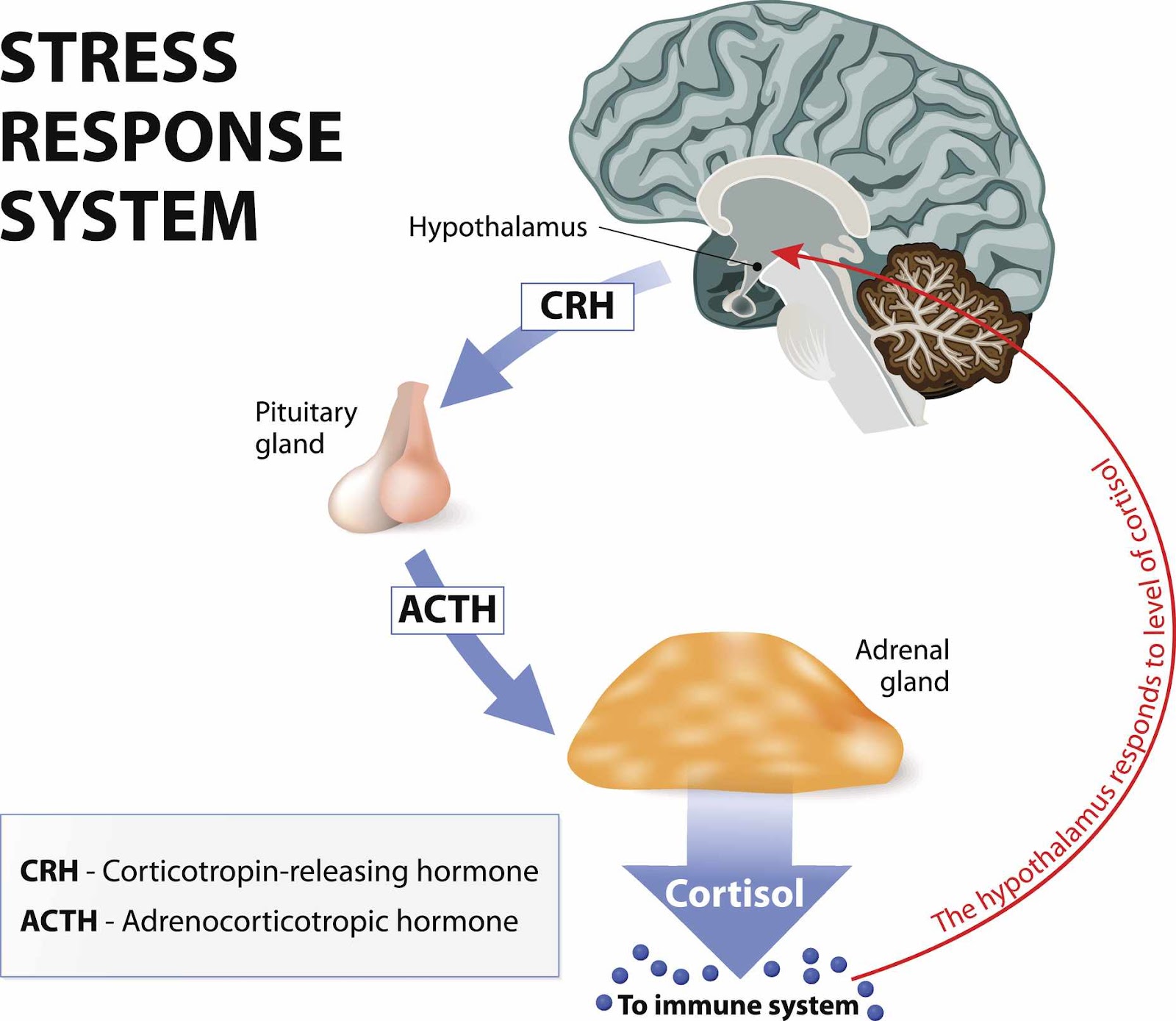 What Functions Does Cortisol Perform?

Cortisol performs the following functions for different parts of our body: 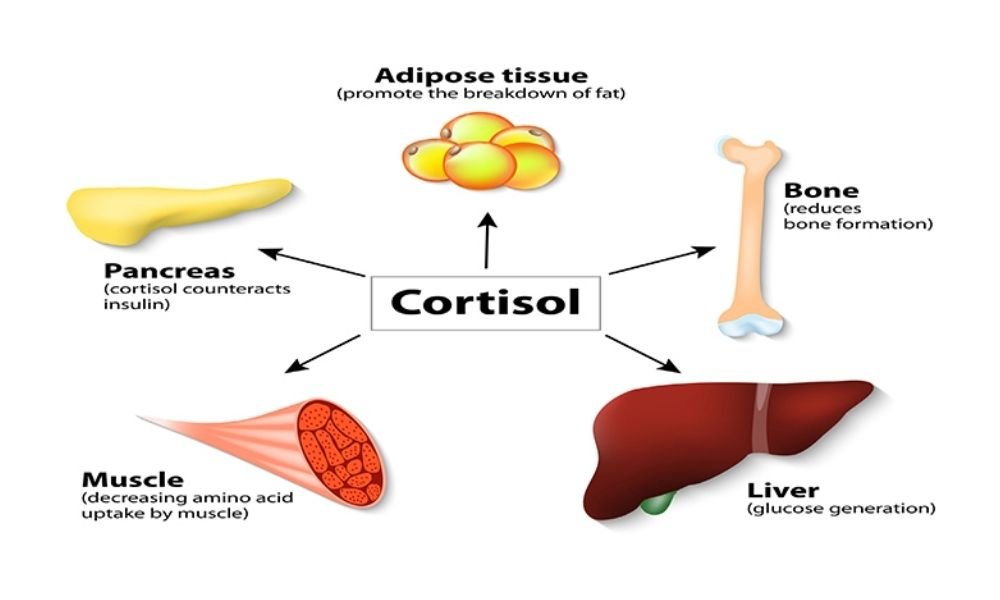 Hormonal changes can be stressful. The endocrine system is responsible for the production, secretion, and regulation of hormones in the body. It is made up of glands that release hormones into the bloodstream, where they travel throughout your body to target organs and cells. This process helps control numerous bodily functions such as metabolism, growth, sexual development, and stress response.

If your endocrine system becomes overactive or underactive, it can affect many different aspects of your health. If you are facing any hormonal changes, it is important to consult a doctor. They will be able to determine the cause of your symptoms and help you treat them.

Endocrinologists at Houston Endocrine Center are experts in diagnosing and treating hormonal conditions such as diabetes, thyroid disorders, PCOS, pituitary gland disorders, metabolic syndrome, and more. If you are experiencing any of these endocrine disorders, contact us today at +1 832-862-3236 to schedule an appointment with one of our endocrinologists.